There’s something that many other people have got that I simply don’t get and that’s style. Any style that I possess is purely accidental or possibly stolen. Mostly it’s obviously absent. Although I don’t care much for clothes and jewellery, I’m always secretly impressed by people who have a sense of style around them. Not the makeup plastered cartoons of style that drunkenly teeter about in town centres on Friday nights, but those who manage to look good without appearing to make much of an effort.

I recognise that style can be very important. For a book, good styling can help the reader focus. Unfortunately, just as my clothes scream ‘PRACTICAL’, so too do my words on the page. I can’t do laying out. I can spend hours, days, weeks designing a label for an iced flat white bottle and what comes out of that design process is something not much better than what a small, overly serious and colour-blind child would do. Stylish people seem to make things look cool so effortlessly.

Thank the Internet for templates. I used a template called ‘Flipped Classroom’ for the manual (it has been revamped and is now called ‘Textbook‘). It cost $19.99 from iBook Author Templates and saved me heaps of time. Good templates have had a lot of thought put into them: there’s a reason that they decided on this particular font and not that one, they knew when they were designing the template that the text would look better justified left, they spent time thinking about the right amount of space required around heading and how one colour might look against another. In short, a good template can make even me look good. Something that would make me look even better is a Nick.

The other day I went to visit a bloke called Nick Wright at his studio office at Workshop D. I’d been told that he was my man for sorting out my layout. Nick started the conversation by complimenting the layout of the book as it stood. He wasn’t complimenting me, he was complimenting the person who’d designed the template. With that social formality out of the way, Nick got out a pad of paper started pushing out my formatting with the point of his pencil. 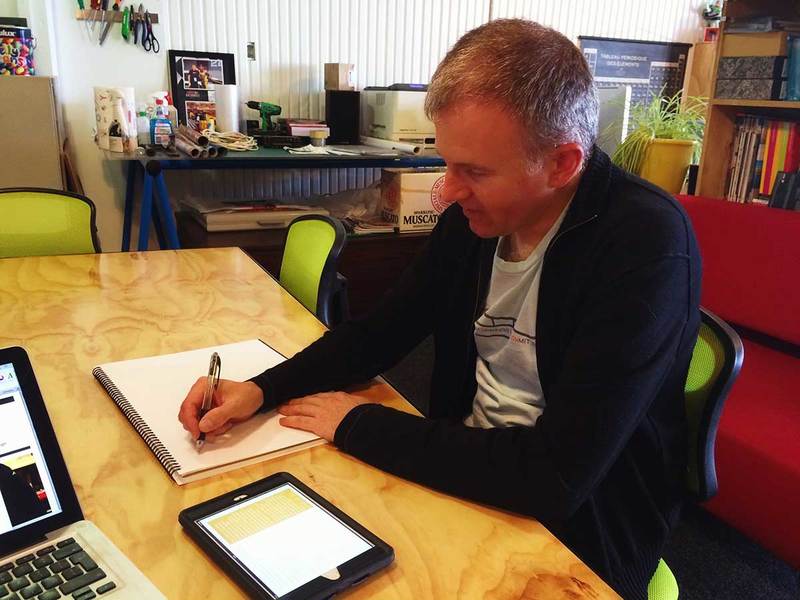 Where I had squeezed everything in to get the text and pictures on the same page, Nick insisted on pushing them out and giving everything space. My vision was looking down at a busy city street from the edge of the sidewalk while holding my breath. Nick’s lungs were full of fresh sea air as he looked over calm seas towards the horizon.

I like people who are good at what they do. They tend to be people with passion. Nick is the kind of guy who is passionate about Palatino. He told me that Arial was not a font to be passionate about and that it was created by Microsoft to avoid having to pay a licensing fee. There’s an interesting and heartfelt article on this called ‘The Scourge of Arial‘. I got the feeling that if I’d used Arial, Nick would have stopped talking to me. Luckily for me, Apple had paid the licensing fee and I had the genuine Helvetica throughout the graphical explanations in the book.

Consistency in the formatting is really important. It’s not just a designer’s bug bear, Nick explained, the reader gets used to finding the start of the new line in a certain place and reading shouldn’t be a puzzle to be solved. I had formatted the body text to the left and captions and sub-titles centre. Now they’re all formatted left. So, now, are many of the pictures. That’s not something that I would have ever thought of, but it looks so much better.

Where I had squeezed things to fit them in, Nick tore things apart to let the light back. He was big on space and, considering that this is an eBook, space doesn’t cost any more to publish. I now have 30 points of space around every image and, if that pushes the text onto another page, I now accept that it’s okay to have pages with a couple of sentences at the top and expansive space across the rest of the page.

Nick didn’t do the laying out of my book. I don’t think I could afford it. He works for some pretty big businesses and was kind enough to give me an hour of his time. Unfortunately, Nick doesn’t drink coffee, so I can’t even thank him by flooding his office with coffee beans. But there is a large pack of craft chocolate heading his way soon. I’m sure Nick could do much more for the book in a couple of hours than I’ve done over the two weeks that I spent reformatting it. If the book does sell enough copies, the first thing I’d do is to ask Nick to improve its readability and flow for the next version. Learnability includes how easy the text is to read, how easy it is to find the information the student is looking for and much more than simply the information in the text. Even for those of us who are not so visually minded, these things are subtly important.

For those students who are extremely visual, the text might be something that they completely ignore. It’s largely for these people that I choose to use iBooks Author to create this textbook. That’s because iBooks Author can display much more than pictures. It can also incorporate…

I’ve run out of time. I’ll tell you about that when I next get a moment.