The reiterative process of iterative copyediting

Copyediting (or proof editing) is usually the second last step before publishing. This is when the manuscript is complete and someone needs to go through turning the author’s imaginations into readable text.

It’s very difficult to correct your own text. You’re not reading every letter in every word right now and most people don’t read every word in a sentence. We look at blocks of sentence and somehow our brains translate the pixels into concepts and images. If you’re reading something that you’ve written, your brain already knows the images and concepts, so ignores dislocated pixels that are glaringly obvious to a brain that is translating for the first time. This makes the author terrible at picking up little grammatical errors and word repetitions in their own work. After getting back the proof reading reports, I was appalled and embarrassed at how many errors I had in my text﹣text that the guys at the cafes were using to learn for their exams.

I actually got three people to proof read my text. All three took up different chisels and hacked away at different aspects of the tome depending on their education. My mother is a linguist and expert scrabble player; she corrected (and laughed at) my malapropisms, made sure that my sentences made sense and corrected my many grammatical errors. Amirah is a scientist and coffee roaster; she zeroed in on the research (she had conducted many of the experiments herself), the notation and also picked up on many errors that my mother had overlooked. Zara totally re-wrote paragraphs.

A lot of the copy edit was simply clearing up repetitions and grammatical errors. These often came about because I’d write a sentence, change my mind about how it should run and failed to changes the verb agreement or notice that I’d doubled up up on words. This is basic copyediting, stuff that is essential to make the reading fluid. Coming across anything that makes the reader stop their flow (like ‘changes’ and the repetition of ‘up’ above) is generally a bad thing.

We all communicate indirectly to some degree because, unless you’re Danish, it’s often considered more polite. If a supervisor is reprimanding someone for turning up to work late and says “You’re late. Please make sure that you are here by 0830 every day.” that’s quite a different tone from “Please be mindful of your arrival time.”

Indirect communication is necessary to avoid upsetting many social mores, but it can be quite toxic in relationships. In fact, there’s a device employed by relationship councillors to combat misunderstanding in relationships called active listening. Active listeners listen quietly until their partner has finished saying everything they want to say (resisting the temptation to correct them on every minor point) and then the active listener says “Let me make sure I fully understand what you’re saying…” and repeats the gist of the message back to their partner. It’s very common that their partner will respond “No, that’s not what I meant.” This clears things up and gives the partner an opportunity to reformulate what they are trying to communicate. This is what being copyedited by Zara felt like. She just got in and re-wrote anything that wasn’t clear to her and I was shocked at how often she had misunderstood my meaning. This gave me the opportunity to rewrite more clearly.

The process of copy editing with Zara involved four rewrites of the book where Zara would rewrite a paragraph and I would understand that I wasn’t making myself clear and so would rewrite a page, at which point Zara understood what it was that I wanted to convey, but needed to also correct my mistakes. The final rewrite was me going through to make sure that Zara hadn’t missed anything and, on a few occasions, correcting her typos. 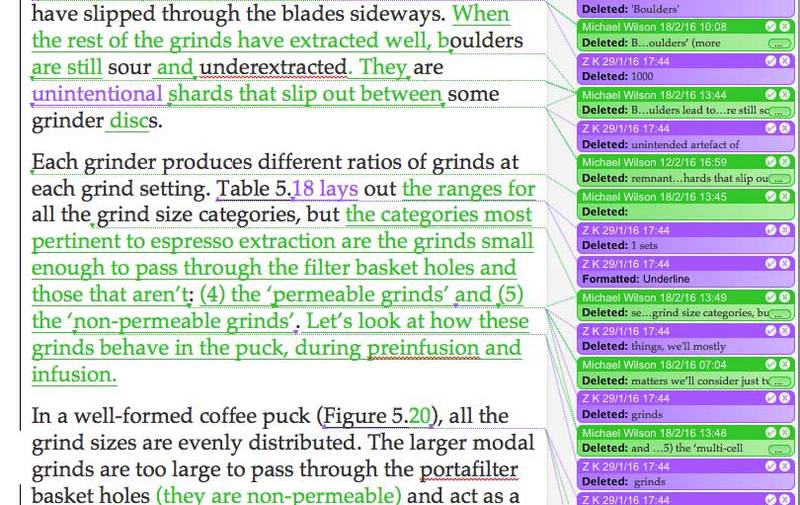 At this point the text was all over the page and none of the figures matched up anymore, so I sorted out the layout and went to see a man about laying out. This is a guy who’s job is making pages look nice. How hard can that be? Well, I saw him a four weeks ago and I still haven’t finished making the changes he suggested. The next post is about layout and how to make a page look good.